In the continuing series of frozen Morris lakes images, here is an illuminated, and frozen, Lake Parsippany this morning as the sun rises.

Lake Parsippany is frozen except for a small section on the western shore where 339 Canada Geese, 16 Mute Swans and a handful of Gadwalls and Mallards were jammed together, possibly wondering what happened to the open water that was here two days ago.

From Mike Newlon:
“Carol and I made a brief trip to the Great Swamp this afternoon – two Cackling Geese at Lord Stirling (equestrian field), too far away for decent photos; White Bridge Road produced a flock of Wild Turkeys; an Eastern Screech-Owl was in a Wood Duck box on Pleasant Plains Road.”

From Margo D. Beller yesterday at Colonial Park, Franklin Twp.:
“A Black-and-white Warbler was poking around at the base of a shrub near the bathrooms at Colonial Park near the rose garden.”

Interestingly, another extraordinarily late Black-and-white Warbler was reported in Cape May yesterday [editor]. 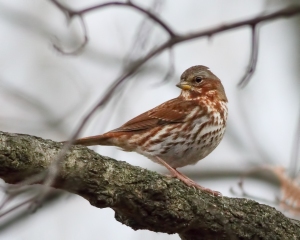