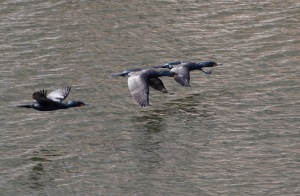 They are back – 3 of the 4 Double-crested Cormorants present at Boonton Reservoir this morning in the photo above – soon to be hundreds co-inhabiting the island with Great Blue Herons.

3 American Wigeon join the continuing 14 Ring-necked Ducks, 1 Red-breasted Merganser (down from 5 yesterday) and the growing number of Common Mergansers, 83.

While there was a sizable gull movement over the Great Swamp NWR this morning, 175 Ring-billeds, 12 Herring and a Great Black-backed (Simon Lane), gulls were practically absent from Lake Hopatcong. Even the many ice fisherman (yes, there is plenty of thick ice to continue this popular activity) didn’t attract the usual Ring-billed Gulls.

The same 5 Redheads, Greater Scaup hen and 3 American Coot continue at Bertrand Island. They were augmented today by a few Ring-necked Ducks, Bufflehead and Common Mergansers. Maybe the lake will thaw by mid-April.

Although the hoped-for Common Redpoll invasion failed to materialize in Morris and Somerset Counties this winter (4 separate feeder accounts in Morris; 2 in Somerset), Pine Siskins continue to devour thistle at feeders throughout the counties. The Siskins in Morris Township in the photo below are present for six weeks with numbers ranging daily from 10-30.

Correction: email subscribers to mocosocoBirds.com – the Osprey from the Great Swamp NWR in yesterday’s post was mislabeled as a Rough-legged Hawk in the original post mailed to subscribers. It is corrected on the web site.