The Cerulean Warbler on Waterloo Valley Road, originally found in May, continues along the section of road south of Kinney-Bell Road (Jamie Glydon). Chestnut-sided Warblers were also encountered. Anyone who has visited this stretch of road can attest to it being an American Redstart ghetto.  A Common Loon remains on nearby Tilcon Lake. It has been here for at least a month assuming it is the same Loon. 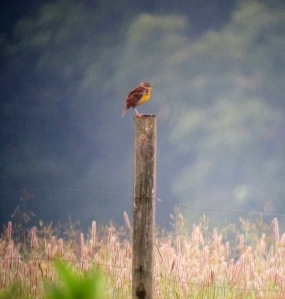 Eastern Meadowlarks and Bobolinks were found today in a grassland field in the southern portion of Washington Township. The field is on private property. Eastern Meadowlark has become a difficult species to find in Morris County. It is listed as a Species of Special Concern by the New Jersey Division of Fish and Wildlife in both breeding and non-breeding status.

There are now two known occurrences of Black-Crowned Night-Herons (BCNH) in Morris County for 2013. Chatham’s Stanley Park has one annually, apparently. It has been seen on or near the Passaic River sporadically since May. Another BCNH was spotted today at Boonton Reservoir on the south side of the island. Other species at the Reservoir include the nesting Cliff Swallows on the Rt. 202 bridge, the usual Great Blue Herons and Double-crested Cormorants and three Ring-billed Gulls, a species virtually absent from the area since April.

A Black-billed Cuckoo was on a wire this morning near the south gate of Pleasant Plains Road, Great Swamp NWR (Jim Mulvey). Is this a juvenile? 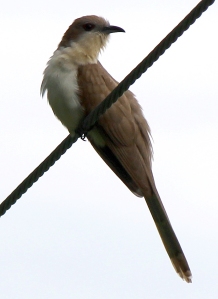