Timberbrook is a road, a pond, and a brook (when splitting the word in two as in Timber Brook). The area is in the Farny Highlands of Rockaway Township. Farny State Park, probably one of the least known of New Jersey State Parks, encompasses the trails around Split Rock Reservoir, goes west to Upper Hibernia Road and Timberbrook Road and north to Charlotteburg Reservoir. Some of the area covered in this report is in the Newark Pequannock Watershed where a hiking permit is required. Winnebago Scout Reservation (WSR), a Boy Scout Camp of the Patriots’ Path Council, takes up a sizable portion of Farny and is off limits to the public. Parking for the route this report covers is in a small lot opposite the entrance to WSR.

Timberbrook Road appears to be a drivable road on maps and it is up to the entrance for WSR. The picture below may dissuade you from attempting to drive the road beyond that. 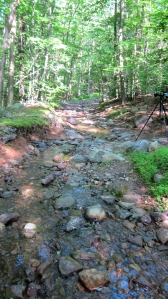 At best, it is a dirt road covered with wood chips and mulch with many pools of water, an occasional boulder sticking through the dirt, etc. It is easier to walk it.

The forest is deciduous. Bird species are typical of the area. The birding highlight of the morning was a singing Canada Warbler in the vegetation at the water’s edge and woods below the southern end of Charlotteburg Reservoir. Historically, this species has nested in northern Morris County as data from the NJ Breeding Bird Atlas bears out.

The return trip was along the Four Birds Trail section that skirts the eastern edge of Timberbrook Pond (Google Maps refers to it as a lake). Some of this trail is as rugged as you will find. It is refreshing to walk through a dense understory along parts of the trail. As photogenic as the pond is, be aware that two microwave towers at the north end are purposely left out of the photo at the top of this post. This is New Jersey after all. 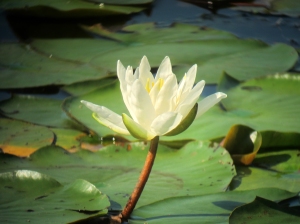 On exiting, the following Snapping Turtle was sitting on Timberbrook Road waiting to be flattened by a car tire.

This is the only situation where you will see a Snapping Turtle in my hand. 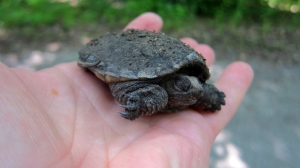 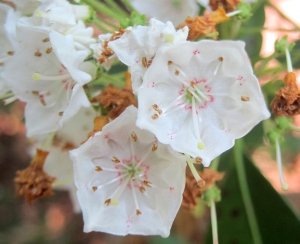