Posted on October 1, 2013 by Jonathan Klizas 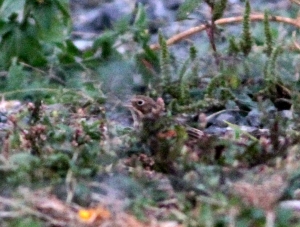 The first Vesper Sparrow of the season in the mocosocoBirds region was seen today at the Wagner Arboretum garden of Glenhurst Meadows. This is one to two weeks earlier than usual for this species in the area. Based on recent early arrivals of certain species, this may be the trend for autumn 2013. 8 sparrow species were seen at Glenhurst along with both Kinglet species, 10 warbler species and 4 Red-headed Woodpeckers – and this was in the late afternoon (Jeff Ellerbusch).

Forget yesterday’s total of 4 Red-headed Woodpeckers (RHWO) at Troy Meadows. Today, 15 were located between Troy Meadows Road and I-80 (Roger Johnson). Troy Meadows is a traditional RHWO hotspot when that species is on its cyclical upswing. Roger said he has not even checked some other locations that can have RHWO, so the actual count could be higher. Other species reported from Troy Meadows are Purple Finch (female), Lincoln’s, Savannah and White-crowned Sparrows.