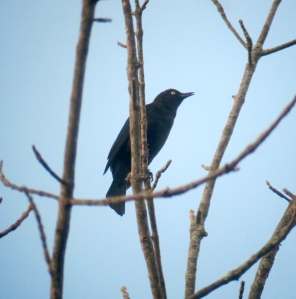 1 juvenile Red-headed Woodpecker was at the S-turn of Troy Brook this morning near the defunct skeet-shooting range. 2 Peregrine Falcons buzzed the area, 6 Great Egrets were in a group at a secluded pond. Yellow-rumped Warblers are numerous. A Lincoln’s Sparrow was one of 7 sparrow species. The Rusty Blackbird pictured above was with a large group of Red-winged Blackbirds along Troy Meadows Road. 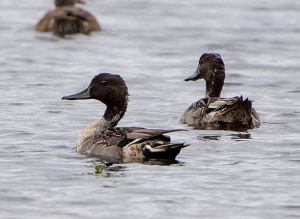 Chris also encountered the uncountable Trumpeter Swan at Mt. Hope Lake. As stated many times before in this space, this is probably an expatriate of the Bernadsville captive flock, but who really knows. It has been at Mt. Hope since the spring. Ring-necked Ducks made their first appearance of the season at the lake, as well.

From Leslie Webster, Friday, Oct. 11 2013:
News from Loantaka Brook Reservation: On Thursday morning, October 10, several small groups of Yellow-rumped Warblers were making their way through the woods, accompanied by some Ruby-Crowned Kinglets. A group of 12 Yellow-rumped Warblers was at Kitchell Pond, along with a few RC Kinglets. No Palm Warblers were observed. A Solitary Sandpiper still is still present on the pond mud flats and on this particular day was accompanied by a Killdeer.