14 Vesper Sparrows at Finderne Wetlands, 6 at Troy Meadows, 2 at the Tourne, 2 at Duke Farms, 1 in Whippany and another in Chatham Twp. This is a convincing pattern. Vespers are on the move. Here is a bar graph based on eBird data for the combined counties of Morris and Somerset which illustrates that they are right on time.

11 Red-headed Woodpeckers (a 6 to 5, adult to juvenile split) were viewed this morning at Troy Meadows. At least 10 were in the snag forest on the northern edge of Troy Meadows where the predominantly Pin Oak woodland meets the marsh. This extends from the gas line east towards the old trap shoot area. Walking this area north of Troy Brook is not recommended unless one likes trail-less obstacle courses through overgrown vegetation and fallen trees. Probably the only reason one can walk here at all is that the climate has been dry recently. Normally this is a wet swamp. Another Red-headed Woodpecker flew over Patriots Path by South Beverwyck Road. 1,200+ Red-winged Blackbirds and at least 30 Rusty Blackbirds were in the Troy Meadows Rd. area mostly in the snag forest.

6 Vesper Sparrows were seen at Troy Meadows. 5 were in one tree by the trap shooting area. The photo below shows 3 of them. Shortly thereafter they were joined by two others in a different tree. Another Vesper Sparrow was seen next to the aforementioned Patriots Path near South Beverwyck Rd. Sparrows are currently abundant at Troy Meadows.  Any large number is an acceptable estimate for the number of Song, Savannah, Swamp and White-throated Sparrows. Field Sparrows are also plentiful. Two White-crowned Sparrows, an adult and a juvenile, were in the brush near Patriots Path.

14 Vesper Sparrows were at Finderne this morning. 14! 15 is the highest count ever eBirded in New Jersey (Mike O’Brien, The Beanery, Cape May, 2010). They were carefully observed without any double-counting occurring. Other species at Finderne were 8 Gadwall, 4 Green-winged Teal, Great Egret, Wilson’s Snipe, Yellow-bellied Sapsucker, 3 American Kestrel, 1 Merlin, 1 Blue-headed Vireo, 12 Tree Swallows, 7 American Pipits and other typical species of the area at this time of year (Jeff Ellerbusch). 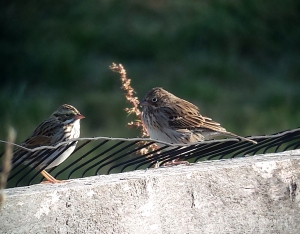 From Ken Hart:
Dark-eyed Junco near (but not at) the feeder at 7:30 this morning. Black River Rd, Long Valley. Also seen this morning (Black River Rd., Long Valley): Blue-headed Vireo; both Kinglets.
This afternoon at the Robert J. Stahl Natural Area in Bedminster: 2 American Kestrels, Palm Warbler, Yellow-Rumped Warbler, 2 Killdeer (at south pond), 1 Wilson’s Snipe (at north pond; may be the same one I saw at south pond a week ago), Ruby-crowned KInglets, Savannah Sparrows, Song Sparrows, and over 20 Turkey Vultures, moving SW into the strong wind.