Posted on November 2, 2013 by Jonathan Klizas

In 2.5 hours this afternoon, 7 Golden Eagles (2 groups of 3, together) and a Northern Goshawk passed over Chimney Rock Hawk Watch in Martinsville (Jeff Ellerbusch, Simon Lane, et al). The full tally will appear on the Chimney Rock post later today.

9 Red-headed Woodpeckers were along the Passaic River at Glenhurst Meadows. 2 Vesper Sparrows were in the garden lot. 8 White-crowned Sparrows, 2 Fox Sparrows, 14 Rusty Blackbirds and flyover American Pipits and Purple Finches are some of the many highlights (Jeff Ellerbusch).

Troy Meadows had 3 Red-headed Woodpeckers in the snags by the skeet area. The Great Egret made it into November in the secluded pond and was joined by 7 Greater Yellowlegs this morning. Two Bald Eagles flew over the marsh as two helicopters hovered over the power line construction area. Dark-eyed Juncos numbers swelled as of this morning. A Vesper Sparrow was in the skeet area with numerous other sparrows. There were hundreds of White-throated and Song Sparrows today. Fox Sparrows and a Hermit Thrush were literally on Troy Meadows Road. At least 17 Rusty Blackbirds were scattered about the Troy Meadows Road area frequently with the 300+ Red-winged Blackbirds.

65 American Pipts were on the model airplance field on Kennedy-Kinney Road off Waterloo Valley Road in Mt. Olive Township. An airplane club was flying remote controlled model planes. The Pipits would reposition themselves every pass of the plane, which was a couple of times a minute. The Tilcon Lake side of the area had kids on dirt bikes and no birds. 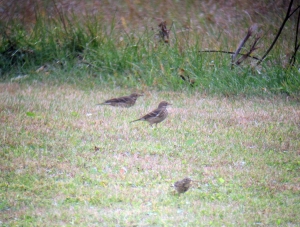 Mt. Hope Lake’s Ruddy Duck numbers are down to 790 from last week’s 900+. Other than a lone Wood Duck, the usual swans and a single Double-crested Cormorant, there were no other duck species on the lake.

Hooded Mergansers made their first appearance of the season in Morris County with 5 at Birchwood Lake (near the The Tourne) along with 40 Ring-necked Ducks (Julie Buechner). Another Hooded Merganser was at the American Road corporate pond in Morris Plains, famous for last winter’s juvenile Pacific Loon (Jamie Glydon).