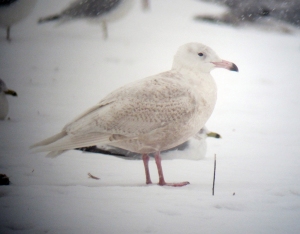 Snow fell intermittently throughout the day. Low-pressure weather systems occasionally trigger the large number of gulls found in Hillsborough Twp. today. A Glaucous Gull found this morning was among hundreds of gulls along Homestead Road in Hillsborough Township. At least 3 Lesser Black-backed Gulls were with a few Great Black-backed Gulls and 100+ each of Herring and Ring-billed Gulls. Also present were the usual multitude of European Starlings as well as crows of both American and Fish species. Homestead is a risky road to bird depending on the time of day as traffic can make birding the road hazardous. The driveways and properties on both sides of the road are private property.

A Common Goldeneye was found in the Raritan River along River Road, Hillsborough Twp. this morning.

From Ken Hart:
A Chipping Sparrow was among the 15 species (which include House Finches, 1 Song Sparrow, Carolina Wrens…) that have shown up at my feeders today on Black River Rd in Long Valley. Interestingly, after I scraped away the snow in some areas to expose dirt and leaves, the Juncos and White-throated Sparrows spent more time there than at the feeders.