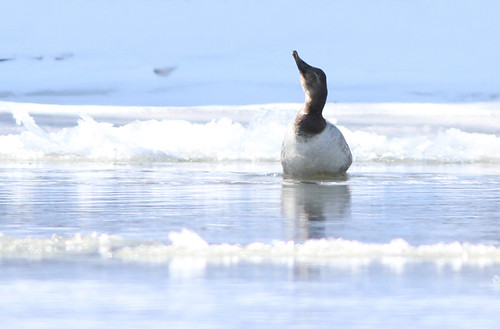 The female Canvasback continues on the Raritan River near the dam at the far west end of Duke Island Park, Bridgewater (Jeff Ellerbusch, Frank Sencher, Jr., J. Klizas). Common and Red-breasted Mergansers joined Ring-necked Ducks in the icy waters. The dam is near the western terminus of the Duke Island Park bikeway. A parking lot adjoining the bike trail makes for easy access to this part of the river. The driveway to this lot is off Old York Road. A sign for Sellars Maintenance Facility and the Somerset County Park Commission is on the corner of the road. The lot is at the end of the driveway next to the river. See this map. Turn on the satellite view and look for the dam on the river. The driveway and parking lot are northwest of the dam on the easterly side of the river.

A light-morph Rough-legged Hawk was found in a different location on the Duke Farms property in Hillsborough Twp. for the third day in a row. Today, it was seen along New Center Road, Hillsborough Twp. (Jeff Ellerbusch). Yesterday, a light-morph Rough-legged Hawk was viewed behind the Orientation Center on Duke Parkway West. Two days ago one was seen along River Road. It is likely these sightings are all of the same individual.

Alan Boyd made it into Troy Meadows today – not an easy task this winter. 3 Red-headed Woodpeckers were near the old trap shoot area near the end of Troy Meadows Road.

Below is a photo by Chuck Hantis of a Barred Owl taking off for the hunt, Great Swamp NWR (click on the photo for a larger image).

From Margo D. Beller, Morris Plains:
The last couple of days there was a yellow form male House Finch at the feeder. This is the second time I’ve seen the usually western yellow form – the first was also in Morris County, at the Freylingheusen Arboretum parking lot several years ago. This morning, as I refilled feeders at dawn, I heard a calling Raven.