The drake Eurasian Wigeon found yesterday, Mar. 20, by Jeff Ellerbusch was at the Van Veghten pond this morning before 7:00 a.m. (J. Klizas). It was not seen later in the day, similar to its behavior yesterday. Caution is required in approaching the pond as the waterfowl will flush easily. Stay in your car, preferably. The Prius is a great stealth vehicle in a situation like this, as this writer can attest to. The following photo illustrates the amount of noise introduced into an image when shooting during pre-sunrise civil twilight . 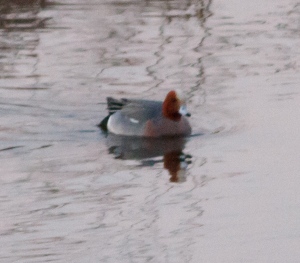 A few words about Washington Township geography: there are 6 municipalities in New Jersey with Washington in their name. Contributing to further confusion with Morris County’s Washington Twp., is that part of the township has a Califon, Hunterdon County zip code according to the national zip code map. The map, here, is correct in illustrating the political borders. mocosocoBirds.com prefers Long Valley as the name for this area. This is how most people label it anyway. The Washington Township designation is confusing (written by someone who grew up in what was then called Passaic Township in Morris County, which later had its name changed to Long Hill Twp. so as not to be confused and associated with the city of Passaic or Passaic County. Is that clear?)

12 Tree Swallows were listed on eBird at Osborn Pond by Robert Stapperfenne.

And, yes, the Red-necked Grebe of Mendham spent the 28th day of its residency at Clyde Potts Reservoir (Kevin Browne).