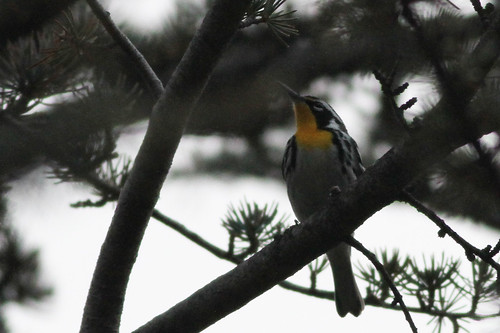 From Brian Clough:
Amy Manning and I had a singing Yellow-throated Warbler at Colonial Park this afternoon. It was hanging out in the Norway Spruces adjacent to the Rose Garden parking lot off Metlar’s Rd.

[Editor’s note: In the early evening, Jeff Ellerbusch was able to relocate the Yellow-throated Warbler in the same location. See the above photograph. This is an excellent record for Somerset County.]

Earlier in the day at Colonial Park, Zach Batren and Holly Ellerbusch found the first Yellow Warbler of 2014 in either Somerset or Morris Counties.

Hank Burk, Mike Ostrow, myself and others saw the continuing adult Little Blue Heron at Loantaka Brook Reservation at different times during the day.

Leslie Webster gives a full report with an added twist:
“News from Loantaka Brook Reservation: Blue-gray Gnatcatchers have moved into the woods and at Kitchell Pond. Palm, Pine, and Yellow-rumped Warblers are still abundant, as are Ruby-crowned Kinglets. A Chipping Sparrow was heard singing at the Loantaka Way parking lot. At the pond, two Little Blue Herons were observed, as was the male Blue-winged Teal.”

Mike Ostrow reports the following:
“I saw Leslie Webster’s eBird report about 2 Little Blue Herons this morning. At first I saw only one. Then later I saw two small herons flying together over the reeds (looking into sun so I couldn’t get much detail, but they looked similar.), and assumed it was 2 Little Blues. However, 10 min later there were two herons in the tree together, and one of them was clearly a Green Heron. So I’m not sure if the flying ones were both blues or not. But I imagine it’s worth keeping an eye out for a second one though. Great little spot!”

From Jennifer Books, Sun., Apr. 13:
The Little Blue Heron was still at Loantaka this afternoon (Sunday, Apr. 13). I along with David Bernstein spotted it in the water behind the baseball field. It was feeding and then flew up to a perch in the nearby willow tree. A beautiful bird I might add!
There is also a lone Pied-billed Grebe at Osborne Pond. And, my sister and I spotted several interesting birds while kayaking the Passaic River upriver from the Fisherman’s Parking Lot. They included our first Little Green Heron of the year, 2 Blue-Winged Teal, 2 Great Blue Herons, a Canada Goose nesting on the top of a root ball from a fallen tree, and several Palm and Yellow-rumped Warblers as well as Blue-gray Gnatcatchers.

Yesterday, April 13, Chuck Hantis found a Glossy Ibis at Melanie Lane Wetlands. This is the 3rd known record for Glossy Ibis in Morris County this spring which is remarkable (all are photographed).