The first Mourning Warbler (MOWA) of 2014 in Morris County was found this afternoon at Troy Meadows by Julie Buechner and seen later by others. The male MOWA was just west of the old shooting range on Troy Meadows Road, usually in the trees and shrubs on the south side of the road, occasionally moving to some bushes on the other side of the road. It never sang, chipped occasionally and generally skulked.

Yesterday, May 18, Robert Gallucci manged to get a photograph of a Prothonotary Warbler at Glenhurst Meadows which is shown below.

There were also reports of a Prothonotary Warbler from the Great Swamp NWR yesterday but without any supportive media documentation. As far as is known, that individual was not located today.

The following photographs are from May 18, taken in a back yard in Lincoln Park. The identity of this Vireo has stirred some debate. What do you think? 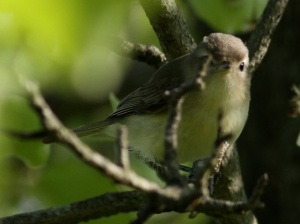