A pair of Summer Tanagers, one immature male and a female, was found in the northwest corner of Lenape Meadow at Lord Stirling Park by Jeff Ellerbusch and observed by others this afternoon. The male was still calling occasionally at 5 p.m. Single Summer Tanagers are reported earlier this season from Chimney Rock and Sourland Mountain Preserve which is remarkable in its own right but two at the same time is simply sensational for Somerset County. A late Northern Harrier was also seen flying low headed towards the Great Swamp NWR.

From Dave Emma:
“Today at Mahlon Dickerson Reservation, on the way to the Acadian Flycatcher spot across from the parking lot, I heard 2 Cerulean Warblers on a hill opposite the marshy pond. Its awfully late to consider these birds migrants, I would think. The Acadian was present as well.” 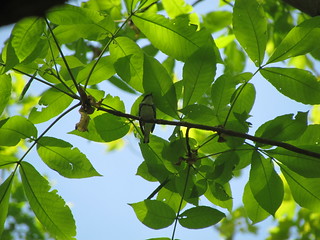 From Carol Arnesen:
“I heard and saw Eastern Meadowlark at Griggstown Grassland Preserve this morning ~7:50. Not an uncommon bird, but this is the first time I’ve definitely seen it at this location.”

A Mourning Warbler was at the north end of the White Bridge/Meyersville Rd. wilderness trail in the Great Swamp NWR this morning (Simon Lane).

The Lord Stirling Park Prothonotary Warblers were seen by many people today.

Two White-eyed Vireos are on territory on Whitehead Rd., Washington Valley in Morris Township. A Tennessee Warbler was singing at the Moody Farm nearby. A Singing Swainson’s Thrush, a late White-throated Sparrow and 70+ Cedar Waxwings were at Fort Nonsense in Morristown (J. Klizas).