Yes, there is a Dickcissel at Negri-Nepote, and other field notes, July 7, 2014

In case anyone doubted the accuracy of July 5th’s report of a Dickcissel at Negri-Nepote Native Grassland Preserve, the empirical evidence is forthwith:

The Dickcissel was seen this afternoon by the original finder, Bobby Skrabal, and Jeff Ellerbusch. It was in the same location as on Saturday: “From the parking lot make the first right, and it was in the patch of trees, where the Woodcocks are usually seen in early spring.”

The usual 6 Grasshopper Sparrows are also at the grasslands (J. Ellerbusch).

How flooded is the little known area in Florham Park named the Fish Tract?

Enough to lure an Osprey for a look. This former farm land on the Passaic River is now a lake after the rain of the past weekend. The habitat at this place is changeable. 18 Killdeer were here last week when the water was nearly drained out. Only 2 were noticed today as all the mud is submerged.

The typical birds of Wildcat Ridge in Rockaway Twp. were evident today. Plants and butterflies may be late in their schedules this year but there is an increasing number and diversity of butterflies including the Hoary Edge Skipper (Achalarus lyciades) below. 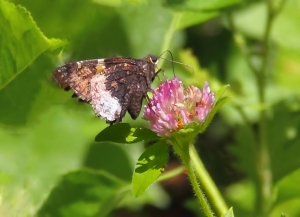 Odonates are currently abundant at Wildcat Ridge. A female Arrowhead Spiketail (Cordulegaster obliqua) posed for the photo below.

3 Responses to Yes, there is a Dickcissel at Negri-Nepote, and other field notes, July 7, 2014