The Little Blue Herons of Morris County continue today. One was at the Lincoln Park Gravel Pits along with a handful of Least Sandpipers, Killdeer, Green and Great Blue Herons, and only 1 Great Egret (Roger Johnson, J. Klizas).

Only one Little Blue Heron was found at Melanie Lane Wetlands early this afternoon where there were 5 yesterday (see that post here). Yesterday’s Snowy Egret was not seen today. A Lesser Yellowlegs, a few Killdeer and Least Sandpipers and the regular 2 Great Egrets, Great Blue Herons and Green Herons were present (J. Klizas).

The herons and egrets can hide in the west end of the marsh. Later in the day at 7 p.m., Chuck Hantis had a group of four Little Blue Herons appear. See the photo below. 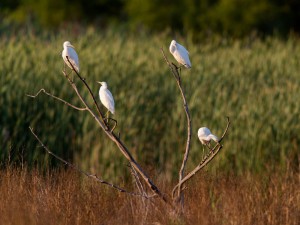 2 Semipalmated Plovers are at Finderne Wetlands but viewed from the small park on Duke Parkway (see map). Spotted and Least Sandpipers are also at Finderne (Jeff Ellerbusch)