Posted on October 2, 2014 by Jonathan Klizas

From Robert Skrabal:
I took a nice trip to Colonial Park this morning. There was a lot of activity, especially around the Rose Garden. I saw 47 total species, including 7 Warbler species. I had plenty of firsts for the fall season including: 1 Green-Winged Teal, 1 Northern Pintail, 1 Winter Wren, 1 Golden-Crowned Kinglet, and 1 Purple Finch. I walked around the Nature Loop, where I found a softly singing Winter Wren, but I did not see or hear the Red-headed Woodpeckers that resided in that area last fall and winter. Hopefully they return.

[Editor’s Note: Colonial Park in Franklin Twp., had a Yellow-throated Warbler much of this past spring]

Sparrows are in the Washington Valley area of Morris Township with Lincoln’s, White-throated and Swamp Sparrows this afternoon (J. Klizas).

This weeks’s migration has been weak, to say the least, but there are birds to be found. A look at the radar from a few minutes ago looks promising for tomorrow morning. The greenish areas are not rain. 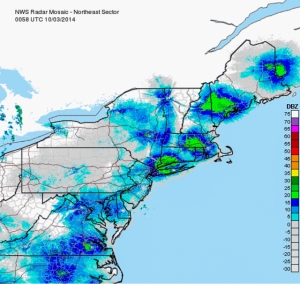