Posted on January 1, 2015 by Jonathan Klizas

Today’s influx of Bonaparte’s Gulls in Morris County is the first time this species is reported in January (or December, or February) in  Morris and Somerset Counties in the Age of eBird. Of course, ornithological history does not begin in 2002, the birth year of eBird, but unless pre-eBird records surface, this is what we have.

Lake Hopatcong is an annual winter host to Tundra Swans. 4 were near the base of Halsey Island this morning, viewed from Nolans Point at the northern end of the lake. The Tundra and Mute Swans move around. Two weeks ago they were between Brady Road Bridge and Nolans Point; last week they were at the south end of the lake at Hopatcong State Park. That area is frozen now as is the lake north of Nolans Point. Hundreds of Herring Gulls and Ring-billed Gulls plus a handful of Great Black-backed Gulls were also on and around the lake. 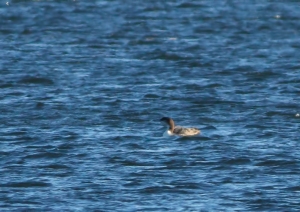 The Geese of Somerset County

The Barnacle Goose was seen this morning flying over Duke Island Park headed west (Jeff Ellerbusch). Otherwise, it was not reported at all from Duke Island Park today. However, it was sighted at North Branch Park with 1,200 Canada Geese in the early afternoon (Tom Smith).

The Greater White-fronted Goose and Cackling Goose at Duke Island Park were seen today in the Raritan River by many observers. The park is a big place. If the geese are not on the turf the chances are very good they are somewhere in the river often near the far western most parking lot.

The Sandhill Cranes are using a field other than the one on Randolph Road, Franklin Township. For the past few days, they are reported from a field west of the intersection of Metler’s and Weston Rd.

Budd Lake is almost entirely frozen. The recent cold front is freezing much of the lakes and other bodies of water in Morris.

Kenvil Lake is still mostly open and continues to harbor a raft of 50 Lesser Scaup, 100 Ruddy Ducks, 27 Ring-necked Ducks and a continuing female Red-breasted Merganser, most likely the same one that has been at the lake for weeks. 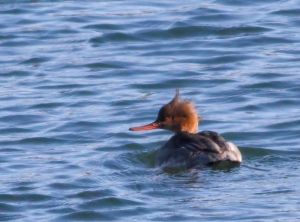 Morristown’s Cackling Goose continues at Speedwell Lake as of today. This individual stands out with its silvery sheen. In Morris County, it is unusual for a Cackling Goose to be this cooperative and stay around as long as this goose has. 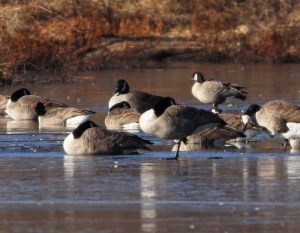 The Delaware and Raritan Canal Towpath in Franklin Township is one of the best venues for observing waterfowl on the Raritan River in Somerset County.  21 Common Goldeneye were on the river today. The high count for Common Goldeneyes  at this location is 116 on March 11, 2014.  Another species of seasonal interest found at this location today is a Brown Thrasher (Jeff Ellerbusch).