Posted on February 8, 2015 by Jonathan Klizas

The Vultures of Green Pond Road

The vulture roost behind the Barn Restaurant and Party City on Green Pond Road, Rockaway Twp., has been active for approximately two years according to Tom Gorman in the mocosocoBirds post from January 25. This morning, 36 Black Vultures and 27 Turkey Vultures were at the roost site at 9:10 AM. Not only do small groups roost in the trees surrounding the parking lot, they are spread out everywhere one looks: rooftops, lightposts, dumpsters, fencing. It is as if each vulture or small groups of vultures have their own roosting territory. 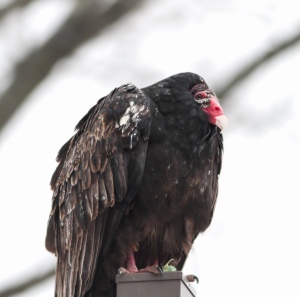 Common Redpolls and Pine Siskins on the Move