Canvasback and Redheads on the Raritan River 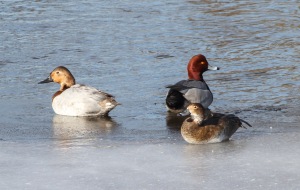 Yesterday, 2 Redheads were found on the Raritan River near the bandshell at Duke Island Park (John J. Collins). The Redheads remained today and were joined by a female Canvasback, found by Frank Sencher, Jr. The ducks are viewable from either Duke Island Park or River Road in Hillsborough (with great caution). This section of water is one of the few easily accessible open stretches in the Raritan River in the immediate area.

From Mike Newlon at Negri-Nepote Native Grassland Preserve:
2 Rough-legged Hawks, one dark; one light. They were too far for good photographs though, hence the attached Northern Harrier. Also 3 Northern Harriers and 3 Red-tailed Hawks. 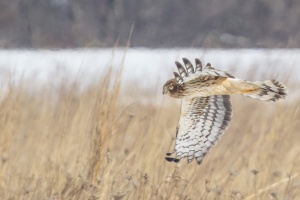 Ducks along the Towpath

Northern Flicker photo by Jason Denesevich, yesterday at Great Swamp NWR, where there hasn’t been much else lately. 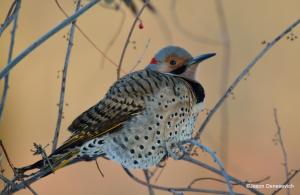