Today was a gorgeous, sunny day as the thermometer neared 50 F degrees this afternoon. The sight and sound of snow melting is a beautiful thing.

A Long-tailed Duck drake is reported from the Delaware & Raritan Canal near South Bound Brook (Mike Adams via eBird). This is a great find for Somerset County. 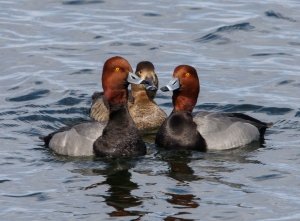 And then there were 10. Redhead numbers continue to grow at the little open water existing at Bertrands Island, Lake Hopatcong. 5 males and 5 females are reported by Tom Justesen and Chuck Hantis this afternoon doubling the total seen yesterday.

How often do Common Grackles make the news. They are nearly absent through the winter of 2014-15, other than a sporadic report now and then. Randy Little had one at his feeder in Basking Ridge, March 5. Jennifer Books reports some at her feeder today. Roger Johnson tallied 14 at Troy Meadows today. A pattern is developing. Let’s look at the numbers.

The following data are from eBird. The 2014 and 2015 totals are through the first week of March in both years.  The Total Ind. column is the total number of Co. Grackles recorded during the stated period. The Checklists column is the total number of checklists recording Co. Grackles. Keep in mind that the winter of 2013-14 was the harshest in memory.