A beautiful Lesser Black-backed Gull (LBBG) in adult breeding plumage appeared briefly at Melanie Lane Wetlands this afternoon. After landing amidst the roosting Ring-billed Gulls on the ice, the LBBG flew for a short distance landing twenty feet from the Ring-billed Gulls (see the photo above). It then went aloft once more, circling the wetlands many times before gaining altitude and heading north towards Troy Meadows. 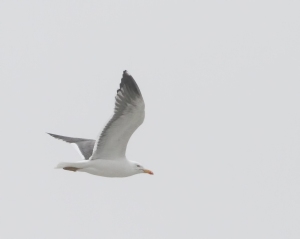 This is the only record of Lesser Black-backed Gull in either Morris or Somerset Counties so far in 2015.

Note the long tapered wings in the above photo which contribute to the long wing projection when the species is at rest. This individual has a distinct mirror on P10 (primary no. 10) but none on P9. Howell and Dunn (Gulls of the Americas – Houghton Mifflin 2007) state that 50% of LBBG have a P9 mirror. The photos are taken at a distance in poor lighting, but the reddish orbital ring was discernible in the field.

A rainy morning brought out masses of the Icterids that have invaded  the mocosocoBirds region during the past week. Rusty Blackbirds made a showing at the Great Swamp NWR. 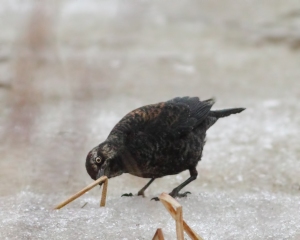 Pine Siskins continue their loyalty to the locations they have inhabited for the past month, namely, feeding stations they seem to prefer.

2 Common Redpolls were at a feeder in Butler, again (Jim Schlickenrieder).

Killdeer reports were more widespread today in Morris County than any other time recently. The snow continues to melt but many of the Morris lakes are still frozen 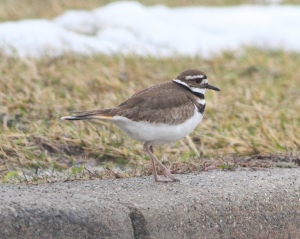