From John J. Collins:
“I birded Hacklebarney State Park this morning and came across a Kentucky Warbler. Heard it singing first then spotted it. I saw it from the white trail (the main trail) just beyond the childrens’ playground. There were 11 other warblers present including Hooded and Chestnut-sided, many Wood Thrushes, three Veerys, a Blue-headed Vireo, etc.”

From Susan Treesh in Somerset:
“Had my FOS Black-billed Cuckoo (heard only, but distinctly) in the woods behind my house, along with my first ruby-throat at the feeder, courtesy of a sick day at home.”

In fact the number of Solitary Sandpipers was so big (11) we went back to pick up our scope to verify their identity and number. They were walking in the pond and around the perimeter in the grasses. ” 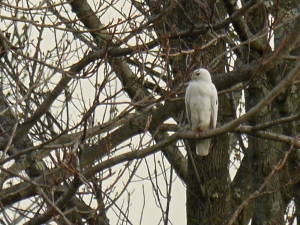 The leucistic Red-tailed Hawk in the above photo is a local celebrity at this point. This hawk was first noticed 3-4 years ago by this writer, who immediately slammed on the brakes and did a double-take. So far in 2015, at least three reports have reached mocosocoBirds including Sunday’s photos by Keith Brodersen. The Buteo is certainly loyal to the Old Dover Road section of Parsippany, which coincidentally, is around the corner from Greystone Park Psychiatric Hospital.