Thank you to any who expressed concern due to the lack of mocosocoBirds posts this past week. Besides yours truly simply taking a short break to recharge, there simply was nothing of note to write about. The spring migration of 2015 that wasn’t has left us with a June swoon of people birding the same old places and finding the same old species.

Speaking of spring migration, the Office of the New Jersey State Climatologist at Rutgers University published the monthly temperature and precipitation charts for May and the preceding twelve months.

The precipitation chart is below. As one can see, May 2015 was the third driest on record going back to 1895: 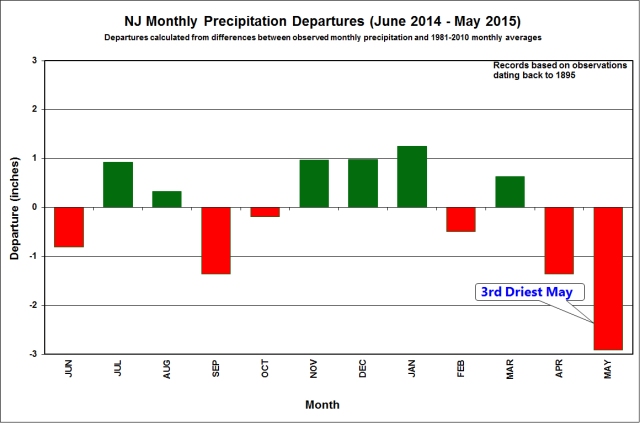 If you correctly thought the winter months of 2015 in New Jersey were brutally cold, May 2015 partially made up for it. It was the third warmest May since 1895.

There are no breeding records for Yellow-bellied Sapsucker (YBSA) in Morris County. It is only since the 1990s that YBSA is an established breeder in New Jersey at all, with records from Sussex County. Is the Yellow-bellied Sapsucker found today at Mountainside Park by Dan Brill another late victim of the spring of 2015? Or a wandering individual looking for new territory to establish?

Last evening, Split Rock Reservoir played host to two interesting species of the twilight, a Common Nighthawk, which hunted insects for 20 minutes directly in front of this viewer, and an Eastern Whip-poor-will, which called in the area of the refurbished dam.