The following photos are blurry, partly due to shooting through an old screen door in shaded light. 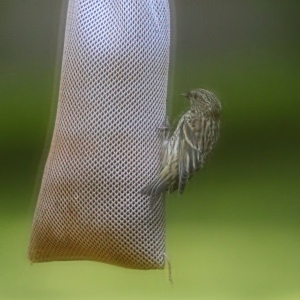 This lone Pine Siskin has visited a thistle sock on Kemble Mountain in Morris Township for at least the past two days. Pine Siskins were daily visitors at this feeder for three months during the past winter/early spring, last seen on May 13. 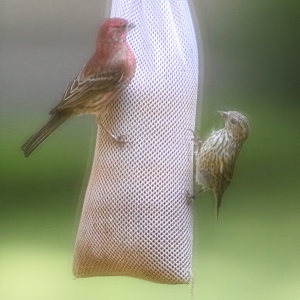 This joins a recent report of a male/female pair at a private residence in Bernards Twp. This is not surprising considering the influx of Pine Siskins in certain locations this past winter.

The one known confirmed historical breeding record in Morris County, according to the Birds of New Jersey by J. Walsh, V. Elia, R. Kane and T. Halliwell (N.J. Audubon Society, 1999), is in May 1988 from Budd Lake with an adult feeding three fledglings. 35 birds were banded in breeding condition at the same time. The only confirmed nesting attempt during the time period of the NJ Breeding Bird Atlas of the 1990s is a nest built in July of 1995 at Green Pond in Morris County, but later abandoned.

In The Birds of New Jersey: Status and Distribution, by William J. Boyle, Jr., Kevin T. Karlson, photographic editor, Princeton University Press, 2011, mention is made of “multiple reports of nesting and juvenile birds” in 2009, following a big winter incursion, but specific locations are not mentioned and no records appear in the eBird database.

mocosocoBird’s inaugural post was March 3, 2011. Approximately eight subscribers received that post. In recent days, the number of subscribers and followers has passed the 1,000 mark with the total amassed from email and WordPress subscribers, along with Twitter, Facebook and Tumblr followers.