Many people are probably not aware that a town with the name of North Plainfield is actually in Somerset County, not in Union County as is the namesake of Plainfield. Then again, South Plainfield is in Middlesex County, spreading the Plainfield dynasty among three counties.

Green Brook Park is mostly in Plainfield but a northern sliver of the park is in North Plainfield. A pond in the park lies on the county border so listers can double-dip the Black-crowned Night-Herons that favor this location. Walter Blenderman has kept track of the herons in this park since 2013, at least. He has tallied Great Blue Herons, Great Egrets, Green Herons and up to 5 Black-crowned Night-Herons at the park. 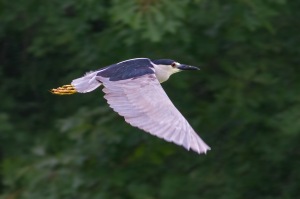 Today, 3 Black-crowned Night-Herons were using the area of the pond – two are displayed in the photos.

Cornell Laboratory of Ornithology’s eBird continues to grow worldwide. A few years ago, a third party mobile app, BirdLog, was introduced and quickly revolutionized how bird sightings are entered into the eBird database.

Cornell’s eBird team has taken over the development of this app an re-branded it as eBird, also referred to as the eBird mobile app. This writer used the beta version for the past month. It works as well as BirdLog. has a few enhancements with more to come in the future. For one thing, it is global and can be used anywhere on Planet Earth. It has multiple language support. And…it is free. Currently it is available only in an iOS version. The iTunes link for downloading it is here. An Android version will be released in the future.

BirdLog is being phased out. So, if you are a BirdLog user, make the switch to eBird mobile as soon as possible.