A Dickcissel appeared in a yard on the Dover/Rockaway border this past week (Andrea Frary). Surprisingly, this is only the fourth known record of Dickcissel in Morris County. It was found on Saturday, Oct. 10 and last seen on Thursday Oct. 15.

For those eBirding this sighting, please use the hotspot labeled: stakeout Dickcissel, Dover (2015)

A Golden Eagle was seen at Chimney Rock, Friday Oct. 16, the second of the week at the hawk watch.

3 Eastern Meadowlarks were found today at Florham Park Fields by Chris Thomas. Chris also found the only other Eastern Meadowlarks in Morris County in 2015 this spring at the same location. 3 Vesper Sparrows were also present (Roger Johnson, Chris “Meadowlark” Thomas).

Another Vesper Sparrow was found this morning on the cow pasture fencing in the west field of Frelinghuysen Fields, Harding Township.

A Red-headed Woodpecker was seen and photographed on Pleasant Plains Road, Great Swamp NWR, Oct. 12 ( as told to Jim Mulvey).

Somewhere in the wilds of Morris County… 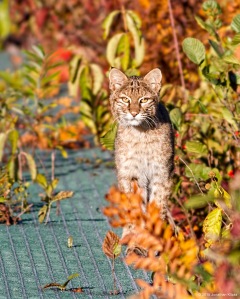 Other photos of this creature may be viewed at Flickr:
Photo 1
Photo 2
Photo 3