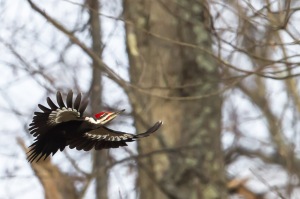 Thanks to Mike Newlon for this spectacular photo of a Pileated Woodpecker in flight at Glenhurst Meadows. Click on the photo for a larger image.

Tundra Swans have returned to Lake Hopatcong. 3 or 4 are reported today from the Lake Forest area at the north end of the lake (Alan Boyd). As in previous years, the swans will probably remain through the winter as long as parts of the lake remain ice-free.

Previously this week, a drake Canvasback was seen at Boonton Reservoir on Tuesday, Dec. 15 (Julie Buechner). Water levels remain low at the reservoir and other bodies of water in Morris County.

Dave Blinder found and photographed a Painted Punting (1st year male/female) at Hatfield Swamp this afternoon. Hatfield Swamp is in Essex County near the Passaic River border between Essex and Morris Counties. It is also a region included in the Boonton CBC. A photo of the Painted Bunting is on Dave’s Flickr photostream, here.