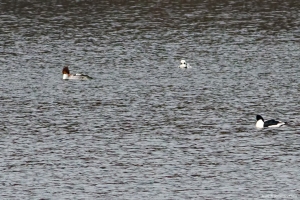 A Long-tailed Duck continues today at Clyde Potts Reservoir, Mendham Twp., for the eighth known day. It keeps company with the 212 Common Mergansers in the reservoir.

This morning, two adult Tundra Swans were on the ice at Lake Forest, Lake Hopatcong, when nearby ice fishermen apparently caused them to fly south towards the Brady Road Bridge. The two Tundra Swans were later found in Van Every Cove, viewed from the concrete pier at Mt. Arlington Beach. A Common Loon was also in the area.

Red-headed Woodpeckers continue to be wide-spread in Morris and Somerset Counties this season.

Three are reported from Troy Meadows Rd., in Troy Meadows today (David Hall). These birds are present since autumn 2015.

Below is a screenshot of an eBird species range map of Red-Headed Woodpecker in the Morris-Somerset Area for January 2016. Clicking on the image takes you to the actual eBird range map. Type New Jersey in the location text box and select the Show Points Sooner check box on the right-hand sidebar. Drill down to view regional Red-headed Woodpecker occurrences in 2016.

The 32nd annual Southwest Morris Winter Bird Count will take place, tomorrow, Jan. 17, 2016. Results of the count will be published here as they become available.  More importantly, will David Harrison, founder and compiler of the count, wear the same crew neck sweater for the 32nd consecutive year? Stay tuned.