January 23’s Blizzard of 2016 created roadside birding opportunities this week. If anyone wonders where White-throated Sparrows are this winter, drive along any quiet road in Harding Township and the Great Swamp NWR, peek down driveways and try to keep count of all the Dark-eyed Juncos and White-throated Sparrows crowded in the snow-cleared places. Hundreds of these two species were seen during a late afternoon drive today. 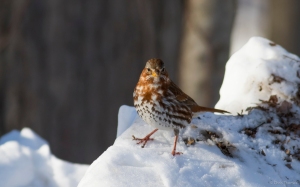 A Red-headed Woodpecker is regular at the bridge near the refuge headquarters by the south gate of Pleasant Plains Rd.

Raptors are scarce so far this winter but a Merlin is an occasional visitor this month.

A Brown Thrasher and Gray Catbird were seen in the Swamp before last weekend’s storm, but not since although several Eastern Towhees continue (Chuck Hantis).

Redheads can be found where water is open, as exemplified by one at Clyde Potts Reservoir and two at Lake Hopatcong today (Alan Boyd).

Pine Siskins put in appearances at feeders in Morris Twp. and Brookside last weekend but are not reported since.