Posted on February 8, 2016 by Jonathan Klizas 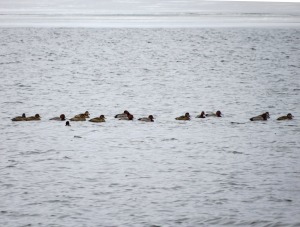 This along with the 14 Redheads that Alan photographed at Lake Hopatcong, Feb. 5, practically makes Redhead the most numerous Aythya species in Morris County at this time. This designation is usually reserved for Ring-necked Ducks which are nearly absent from the area this winter.

Pine Siskins are thinly scattered throughout New Jersey this season. The following Pine Siskin visited a feeder in Morris Twp., Sunday, Feb. 7. Three were reported from the same location the weekend of the Blizzard of 2016 (Jan. 23-24).

The Spackling Goose of Somerset County has returned to a favored location at Duke Island Park (Jim Mulvey). This is the fifth known winter of this beast returning to Somerset County. A post from 2013 describing this bleached-bodied goose is here. 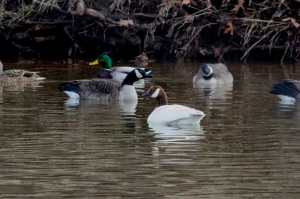 From Ken Hart:
“Heard 2 American Woodcocks “peenting” at 5:40 p.m. today at Fairview Farm, Larger Cross Rd, Bedminster, at the marshy end of the pond next to the parking lot. Soon after I heard the chittering of a flight display above.”

Red-headed Woodpeckers are widespread but local this winter. One is frequenting Duke Island Park. At least one immature has been cooperative for weeks near the bridge north of the south gate of Pleasant Plains Rd. in the Great Swamp NWR. The following photos are by Mike Newlon. 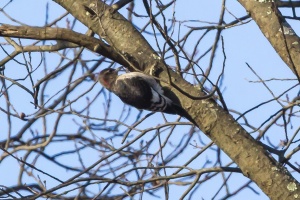 Here is a photo of another visitor to the Great Swamp. 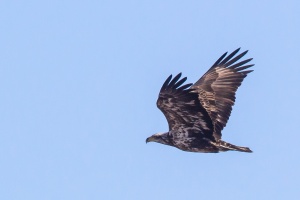