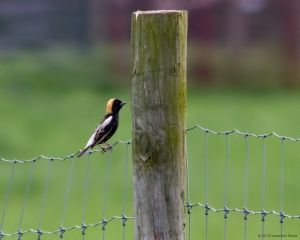 Bobolinks have arrived in their typical locations. Somerset County has a goodly amount of  Bobolink habitat with Duke Farms being the main player.

Morris County, on the other hand, is light on Bobolink habitat but is fortunate to have a few reliable Bobolink locations.  Of course, Bobolinks can possibly be found in any suitable grassland habitat during migration.

Eastern Whip-poor-wills are in their traditional Lake Denmark locations. Two were calling tonight, May 9, approximately twenty minutes after sunset.

All it takes is a puddle

The very obliging Least Sandpiper in the photo below was foraging in a tiny, muddy puddle in a dirt and gravel area off of the driveway at Florham Park Fields late this afternoon. 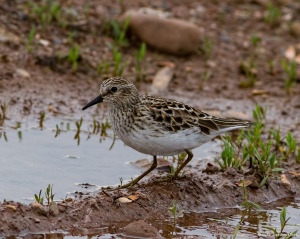 It is with a great deal of sadness that mocosocoBirds learned of the passing of Cliff Miles of Mountain Lakes, Morris County on May 6, 2016. I had the privilege of sharing a route on the Boonton Christmas Bird Count with Cliff most years since 2003. It was always a pleasure to see Cliff who was frequently accompanied by his son, Rick.

Cliff was a hands-on person, manning the hawk watch at Wildcat Ridge and performing many other duties in his love for nature. He had a kind, giving spirit and a hearty laugh. Cliff will be sorely missed.

The Land Conservancy of New Jersey has a tribute to Cliff on their Facebook page. The link is here.

To get a more complete picture of what people are reporting during this busy birding season, view local checklists in the mocosocoBirds region via eBird’s Region Explorer. Use the following links: