During the past two days, migrant songbirds were as plentiful as can be in the 21st century throughout the state of New Jersey. At least for the present, the phenomena of mid-May migration that New Jersey is enjoying represents a beautiful and exciting glimpse of the natural world Homo sapiens has the ability to preserve and nurture.

This writer remembers listening to older birders thirty years ago bemoaning the decreasing amount of spring migrants just as contemporary older birders do at the current time in 2016. What observers have witnessed the past two weekends, as numerous migrants have seemingly been dumped in our laps and adjectives such as “memorable” are used to describe the event, would probably rate an average grade, at best, in generations past.

New Jersey Audubon’s World Series of Birding occurred on May 14 from 00:00:00 to 23:59:59. The strategy for many of the teams is to start at the Great Swamp NWR for nocturnal marsh birds. The usual Virginia Rails, Soras, Bitterns, Owls and the other You-really-expect-me-to-believe-you-heard-that species were tallied.

What many teams may have missed was a King Rail in the management area that a crew of Morris County birders, out on a casual friendly outing, heard and recorded at dawn. A brief sampling of the kek-brrrr call the rail uttered for a lengthy time (with competition from Yellow Warblers, Red-winged Blackbirds, et al) is here.

At nearly the same time the King Rail was vocalizing, a pair of Common Nighthawks appeared hunting in the misty morning dawn light.

The Acadian Flycatcher in the photo at the top of this post is at Mahlon Dickerson Reservation near the “Pine Swamp” along the white-blazed Pine Swamp trail accessed via Sparta Mountain Road, the northwest corner of Morris County. This species is found here nearly every year. A second Acadian Flycatcher was at the other reliable location along Weldon Brook on the Ogden Mine RR trail accessed from Saffin Pond.

Inexplicably, the usually reliable Least Flycatchers at Mahlon Dickerson have yet to put in an appearance.

Cerulean Warblers have returned to Waterloo Valley Road as have a small number of Bank Swallows to the colony at Tilcon Lake.

Despite blustery, cool conditions today, May 15, migrants continue to spread themselves throughout the Morris area. 14 species of warblers were found at Troy Meadows this morning including at least 2 Wilson’s Warblers as well as Canada Warblers and Northern Waterthrushes.

4 Solitary Sandpipers were along a short stretch of Troy Brook on Troy Meadows Road. 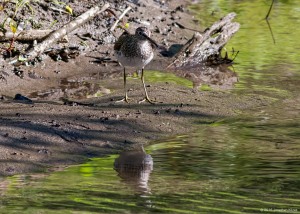 Dave Blinder found a White-eyed Vireo today in a swamp at Wildcat Ridge WMA off of Upper Hibernia Road, Rockaway Township. This is proving to be a scarce species in Morris during 2016. 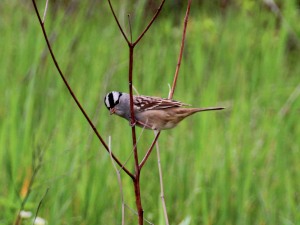 Many checklists and interesting sightings exist for the past few days, too many to list here. This is to be expected during this exciting time of year. View local eBird checklists in the mocosocoBirds region via eBird’s Region Explorer. Use the following links: