On the morning of Tuesday, May 24, Roger Johnson hit the jackpot at the Lincoln Park Gravel Pits (“the Pits”) tallying more than 80 species. Included in this total was a singing Mourning Warbler which was found and barely photographed by this observer later in the afternoon (see that mocosocoBirds post here).

Also on that day, a Prothonotary Warbler was seen and heard by Roger at the beaver dam near the berm separating the municipal swimming lake from the Pits’ main lake. It was not found in the afternoon.

Incidentally, the beavers are having a chew-fest with the trees at the Pits. In the course of one-half year they have obliterated a section of young willows from the north end of the main lake and amazingly done the same with a stand of young trees at the south end. Beaver-ness is evident around the entire perimeter of the lake.

Yellow-billed Cuckoos (YBCU) are widespread during the past week with multiple individuals present at many suitable locations in Morris County. The Pits had at least four this morning. An interesting note about the YBCU in the photo below is that he vocalized with the worm in his bill, pulsating his throat while uttering the percussive ka-ka-ka-ka-kow-kow-kow-kow-kowlp-kowlp-kowlp. 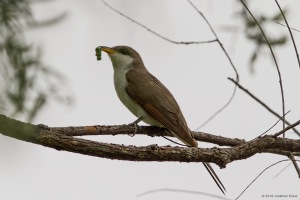 The Birds of North America Online states that the Yellow-billed Cuckoo “has been dubbed the Raincrow because of its apparent tendency to call more frequently on cloudy days”. It certainly was cloudy this morning with multiple Yellow-billed Cuckoos frequently calling, although their proficiency as a forecaster of rain is not substantiated.

The Yellow-billed Cuckoo in the above photo almost drowned out the subject of this post. After departing from an extended stay with the Cuckoo, this observer heard another interesting song. It goes something like this: song of the Prothonotary Warbler (at the Pits).

It took ten or more minutes to finally track down the source of this song. The photo at the top of this post is of the singer on the recording, once known as the Golden Swamp Warbler. The location is approximately 2,500 feet southeast from the beaver dam where it was seen on May 21, according to the Google Maps distance calculator. The Prothonotary Warbler (PROW) was very territorial and singing constantly. The moss in the PROW’s bill gives evidence to a possible nesting attempt.

A female was not seen, although a potential nesting site was witnessed. There are no known breeding records of PROW in this section of Morris County. PROWs have bred periodically for years at the Great Swamp NWR. Other than that, the only known possible record in Morris is one from the Denville/Tourne County Park area during the New Jersey Breeding Bird Atlas of the 1990s. If any other Morris breeding records are known please send them to mocosocoBirds.

A fraction of Tuesday’s shorebirds at the Pits were present today with only 14 Least Sandpipers, a pair of Greater and Lesser Yellowlegs, one Solitary Sandpiper and at least 11 Spotted Sandpipers.

Not a single migrant passerine was recorded today at the Pits. As stated in this space previously, the Pits is not an easy place to get around in. You can enter via a path at the north end near Kamm Street and walk the berm. This is publicly accessible as far as is known. Any where else in the Pits? – you are on your own. A disconcerting development is the increased presence this year of destructive ATV trails with many muddy tracks in the heart of the shorebird habitat.