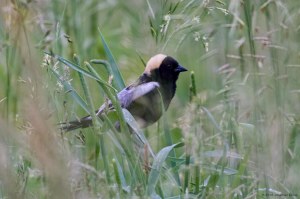 A Grasshopper Sparrow has been reported from here recently but not detected by this observer. Red-winged Blackbirds are abundant. Five Bobolinks, mostly males, were seen concurrently in the east field and likewise in the west field. This means there are probably more Bobolinks in the fields.

The Frelinghuysen family (Rodney Frelinghuysen is the congressman from the 11th district, encompassing most of Morris County including the highlands) and the Harding Land Trust are to be applauded for keeping these fields in their preserved state.

Margetts Field on Blue Mill Road has had nesting Bobolinks in the past but none are currently in residence.

The Black Vulture of Sayre’s Farm 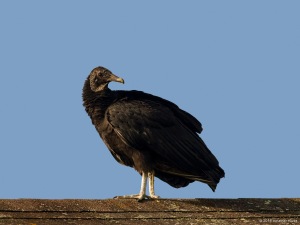 Sayre’s Farm will not be found labeled on a Google map. It is a name created by this author to label a property formerly owned by Theodore Sayre in the the 19th century. According to county park maps, it is part of Lewis Morris County Park. Unfortunately, the old gravel driveway on Mendham Rd. is gated and locked, a recent development some 3-4 years ago. Prior to this, it was a local birding hotspot due to it’s variety of habitats in a small area.

Patriots Path courses through the back end of the property, so access is still available for those who enjoy a long walk. The Black Vulture in the above photo is alleged to be the same individual seen on the property’s barn for a few years now, and at all seasons.

He/she is usually solo. The barn has wide barn doors on one side (locked of course) with a 3-4 foot gap above the doors. The Black Vulture frequently roosts on the top of the doors. Rather than flying away as expected when a person approaches, the vulture flies into the barn, much to the observer’s surprise.

Incidentally, Ivan Kossak initiated a community project in 2016 to see how many species of birds can be found in his hometown of Lincoln Park: The Great Lincoln Park Bird Count. A Facebook community page is setup here, although a Facebook account is probably necessary to view it.

A King Rail was discovered at Troy Meadows on May 27 by Mike Ostrow and was vocalizing through at least May 31 before falling silent. Apparently, the rail’s vocalizing decreased as the density and intensity of mosquitos at Troy Meadows increased. A recording of the King Rail clucking is here. 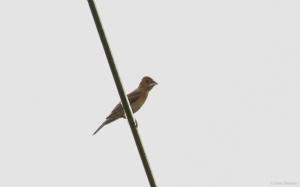 So far in June, Blue Grosbeaks are reported from Negri-Nepote Native Grassland Preserve (many obs.) and Duke Farms (Jeff Ellerbusch). The only Morris County Blue Grosbeak report in 2016 is of a single individual at Bamboo Brook on May 11 (Bill Lynch).

And, in closing, a Brown Thrasher at the Moody Farm in Washington Valley, Morris Township. 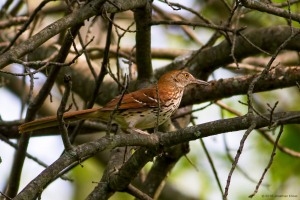