In 2014, a Yellow-throated Warbler spent much of the spring in the mature White Pines and oaks, north of the parking lot at the van der Goot Rose Garden section of Colonial Park in Franklin Twp. Dozens of people were able to observe the warbler during its stay. The species was missed in the park during 2015 despite extensive searching.

Yellow-throated Warbler is not an expected species in Somerset County or anywhere else in much of the interior of New Jersey. The main breeding populations are centered around Cape May County and at scattered locations along the Delaware River with an ongoing population at Bull’s Island in Hunterdon County. It is not often encountered during migration.

Yesterday, June 21, Ben Barkley located a singing Yellow-throated Warbler in the same location at Colonial Park as that in 2014. Other birders were able to observe it throughout the day. Many thanks to Ken Eberts for sharing his photos with mocosocoBirds.

The Yellow-throated Warbler continues at Colonial Park today. It sang incessantly between 6:00-6:30 this morning. An iPhone 6 Plus recording of its song is here. Please note that the Rose Garden is west of Mettlers Road which is the opposite side of the road as the main section of the park. 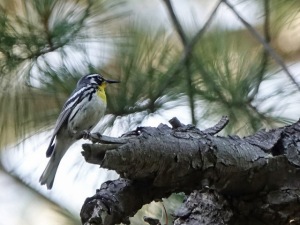 It will be left for others to debate whether this individual is the nominate Setophaga dominca dominica, the “coastal” Yellow-throated Warbler, or if this is the midwestern sometimes white-lored S. d. albilora, or “Sycamore Warbler”.

A Trumpeter Swan continues to hang out with the Mute Swans at Lake Musconetcong.

Sandhill Crane fans can be happy come November. Corn is planted on Randolph Road, Franklin Township this year instead of soy beans. This has been a popular drive-up-and-see-the-cranes spot for years, but only when corn is planted.