Posted on February 4, 2018 by Jonathan Klizas

Thousands of Canada Geese and a small number of ducks are using Clyde Potts Reservoir in Mendham Twp. this winter. It is one of the few bodies of water in the area that has a sizable section of ice-free water.

These distant, heavily cropped, low-light photos will have to serve as documentation for today’s sighting. Frankly, it is about time a Greater White-fronted Goose showed up in Morris County this year. Sightings of this species are spread around the state with as many as six(!) found last week at Merrill Creek Reservoir in Warren County. 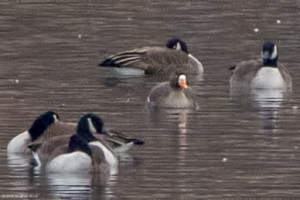 Adult Bald Eagles are regularly seen in recent winters at Clyde Potts Reservoir. It is anyone’s guess where they originate as no known nests are in the immediate area. The Great Swamp NWR eagle nest is approximately ten miles away. The Troy Meadows eagles are a bit further. These are the two nests in closest proximity to the reservoir. The many geese in the water clung together in a large raft as this Bald Eagle repeatedly swooped down on the waterfowl, although never catching any prey. 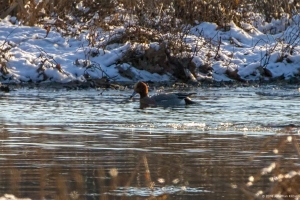 A drake Eurasian Wigeon is frequenting an area known as Waterloo Lakes in Mt. Olive Township. It was found on January 28 by Tom Halliwell and photographed by Alan Boyd. It was seen Feb. 3 as well. This is probably the same individual at nearby Clark Drive in November, 2017 and possibly the same duck that was in Morris County during the winter of 2016-17.

Waterloo Lakes is an overflow of the Musconetcong River near Waterloo Village. Creative geographical bookkeeping is necessary to list the duck(s) for Morris County as you are actually standing in Sussex County while viewing the lakes, which are in Morris County.

Musconetcong River is the border between Morris and Sussex Counties at this location. Adding to the convergence of borders in this area, Warren County is a short distance down the road, just south of the I-80 overpass.

There is a gated dirt road near the lakes which leads to the old Indian village. This is where one can view the Morris side of the lakes.

If one is so inclined, it may be possible to double-dip this duck and list it for Sussex County by viewing it on the Sussex side of the river from Waterloo Village if the main gate for the village is open.

It is a shame to see the old homes and buildings of Waterloo Village falling into disrepair. It is a long time since its glory days as a historic site in the 1970s and ’80s. It was also the summer home of the New Jersey Symphony Orchestra for a period.

The two Ross’s Geese were last seen at the VA Hospital in Lyons on Jan. 28. It is not known if anyone has looked for them since.