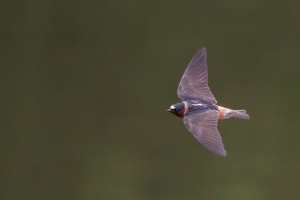 During the 1980s, the center of Cliff Swallow breeding in New Jersey was at colonies on the Delaware River at Bull’s Island and Lambertville in Hunterdon County as well as several locations in Sussex and Warren Counties. The New Jersey Breeding Bird Atlas of the 1990s added scattered locations in northern New Jersey.

Since that time, Cliff Swallows have colonized bridges spanning the Raritan River from Middlesex to Somerset Counties. A new location was found this year at the Rt. 206 bridge viewable from Peters Brook Greenway, accessed from S. Bridge Street, Somerville. 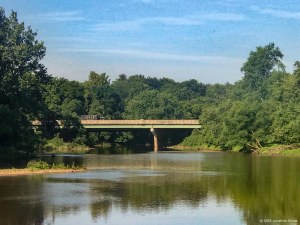 Another newly discovered Cliff Swallow nesting site is the east bridge at Opie Road where 4 adults were seen flying to and from the bridge on June 22 (Jeff Ellerbusch).

The I-287 bridges over the Raritan may still host Cliff Swallow colonies. The Queens Bridge in South Bound Brook appears not to have any this year.

Another nesting site in Morris County is at Two Bridges in Lincoln Park (and Wayne and Fairfield). Cliff Swallows were reported sporadically from here in recent years. The swallows are apparently nesting under the Morris/Essex bridge as are the many Barn Swallows.

For those so inclined, Cliff Swallow can be listed for three counties at Two Bridges as this point is the convergence of Morris, Passaic, and Essex Counties.

Two Bridges can be a productive waterfowl spot in winter. The Pompton River empties into the Passaic River at this location. The current keeps the water open when other bodies of water are frozen.

In memoriam: The Mute Swan of Kitchell Pond 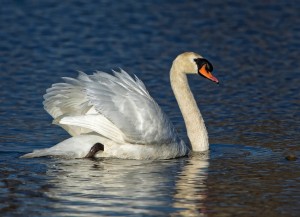 Years ago, two Mute Swans inhabited Kitchell Pond (or Lake, if you prefer) at Loantaka Brook Reservation. Approximately ten years ago, one of the swans was killed. The story this writer heard was that a family let their dog into the pond and it attacked one swan, mortally wounding it.

The lone remaining Mute Swan continued through this decade, a regular and familiar presence at the lake year-round (Kitchell Pond is one of the few bodies of water in the Morristown area that resists freezing as long as it can in the winter ).

This year, the story mocosocoBirds heard is that the swan became entangled in fishing line for a lengthy time, became weak and was in rough shape by the time The Raptor Trust was notified and took it in for rehabilitation. The Trust did the best they could, but the swan took a turn for the worse and was humanely euthanized to end its suffering.