Posted on November 3, 2018 by Jonathan Klizas 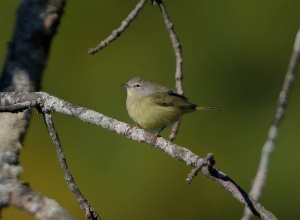 An Orange-crowned Warbler has been captured in beautiful photographs by Warren Van Varick on Oct. 4 and Dave Blinder on Oct. 23. Both sightings were found near the same area of Patriots Path at the southern end of Troy Meadows, accessed near the power and gas lines along South Beverwyck Rd. The Orange-crowned Warbler was usually seen along Patriots Path between the gravel parking lot and the gas line (see the South Beverwyck Road entry on the Troy Meadows map). Roger Johnson saw the bird in a similar area on October 10.

This writer saw it on the afternoon of October 25 after Warren photographed an Orange-crowned Warbler (OCWA) along the power-line in the morning. An OCWA was seen in the same area on Oct. 28 and Nov. 1 by Alex Bernzweig and Rob Fanning respectively. 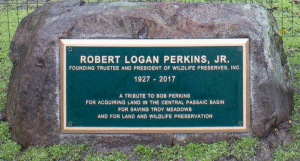 You may not be familiar with the name, but Bob Perkins (1927-2017) is the reason we have Troy Meadows in Morris Co. and Great Piece Meadows in Essex and Morris Counties. On October 27, 2018, Wildlife Preserves hosted a ceremony commemorating a memorial plaque in honor of Bob Perkins at Troy Meadows. Dave Blinder wrote a blog post about the event. You can read that here. To find out more about this forward-thinking conservationist, read the interview conducted by An American River author Mary Bruno, here.

Frequent mocosocoBirds contributor and peripatetic New Jersey nature photographer, conservationist, and Wildlife Preserves Land Steward, Dave Blinder, has a showing of his photographs in the Haggerty Education Center of the Frelinghuysen Arboretum entitled Landscapes of New Jersey in Morris Township during the month of November. The show’s opening is Saturday, November 10, 2 PM to 3:15 PM. Dave has a blog post about the exhibit, here.

A post about the Christmas Bird Count (CBC) will be published shortly. Meanwhile, anyone interested in participating for a part of the day, a full day or just feeder watching, can contact the compiler at boontoncbc@gmail.com.

Gulls Simplified: A Comparative Approach to Identification by Pete Dunne and Kevin Karlson

A new field guide is available or about to be released. Pete Dunne and Kevin Karlson have teamed up for Gulls Simplified: A Comparative Approach to Identification published by Princeton University Press. Amazon has it available Nov. 13. Both authors talk about their new venture on BirdCallsRadio episode #144.

2 Responses to The Orange-crowned Warbler of Troy Meadows; Bob Perkins; other news – Nov. 3, 2018