Yellow Rail (Coturnicops noveboracensis) is a rare visitor to New Jersey with approximately forty accepted records going back to circa 1877 (see the New Jersey Bird Records Committee’s Accepted Records list here). There are zero records since 2014.

As Bill Boyle states in  The Birds of New Jersey, Status and Distribution published in 2011: “There have been almost forty accepted records of Yellow Rail in New Jersey, including twenty-one specimens, but many encounters are not reported to the Records Committee.”

As of October 2019, make that twenty-two specimens and this one will be reported to the New Jersey Bird Records Committee. 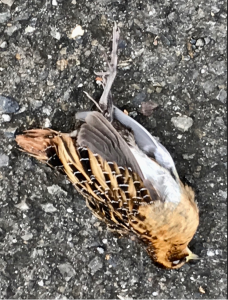 This is John Berry’s account from October 25, 2019, of finding a deceased Yellow Rail in the Great Swamp on the headquarters driveway: “I almost drove by the rail. We were in a UTV [Utility Task Vehicle, editor], driving to a worksite (we’re volunteers on the swamp strike team, which does habitat restoration/protection projects). I saw it was a dead bird and, from its color, assumed it was a sparrow, drove 30 more yards, then realized it wasn’t a sparrow, so stopped.”

The rail was not collected, but Richard Hiserodt documented the find with a photograph taken with an iPhone. The rail appeared to be recently expired so the October 25 date seems accurate and will be the date of the sighting in the eBird database.

Historically in New Jersey, Yellow Rail records from the autumn are visual records. Spring migration records should be vetted carefully as Yellow Rail nocturnal vocalizations can easily be confused with Cricket Frogs in cool spring weather.

Here is the range of Yellow Rails. As you can see, New Jersey is not on their radar. 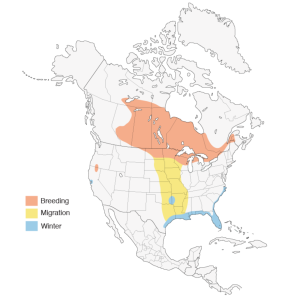 The Yellow Rail report raises an interesting dilemma regarding the entering of dead species on eBird checklists.

According to the eBird file What Data are Appropriate? found here:
“Only include living birds count. In the long run (eBird) hopes to gather information on dead birds, but at this point eBird is intended only for living birds.”

What about extraordinary dead birds? Yellow Rail is a very significant bird in New Jersey, dead or alive. A search through the eBird reviewer’s forum regarding this issue returned the following comments by Marshall Iliff, the eBird Project Leader at Cornell Laboratory of Ornithology.

From Marshall Iliff, the caps are Marshall’s:
“So, for those who have NOTEWORTHY dead birds to enter, these are the considerations that need to be factored in:

2) Dead birds should not be entered as the date is not likely to be correct. Beach-washed birds or very old roadkill may not have any association with the date it was found. As Chris Wood wrote in a 2010 (!) exchange on this topic “there is really no way that a mummified Long-tailed Jaeger found in Ithaca in February should ever be entered and validated in eBird because we have no idea on the date the bird really showed up” [this is a real example]

3) Dead birds should not be included in your personal count *unless* you have opted out of Top 100 and plan to remain that way. Dead birds quite simply do not “count” on bird lists when they are featured in competitive fora like the Top100

4) the best way to avoid #3 is to have a separate account, such as “Wisconsin Historical Data” that can enter the dead bird information.”

That sums it up. If you find a NOTEWORTHY dead bird, use intelligent judgment when listing it on eBird. eBird reviewers, please be consistent with the aforementioned guidelines.