Thanks to Chuck Hantis for the above photo.

This represents the second Morris County record for this species. In fact, Morris and Somerset Counties have three of the past eight Say’s Phoebe’s records in New Jersey since 2011. The other five records are split between Cape May and Monmouth counties. That is nice geographical company to be associated with. This assumes the New Jersey Bird Records Committee accepts today’s record. Based on the many photos of today’s Say’s Phoebe, it looks like an easy decision for the committee to make.

Two previous spring records of Say’s Phoebe exist in the annals of accepted records of the New Jersey Bird Records Committee. The first was at Garret Mountain, April 16, 2003, and the last was in Cape May, April 30-May 1, 2009. Today, April 23, adds a third spring record splitting it right down the middle between the previous two April dates. Other than the spring records and a wintering Say’s Phoebe in 1956, all of the other New Jersey records are from September through November. Today’s record will make a total of 24 for the state.

Many observers were able to practice social distancing (enough of Covid-19 is written elsewhere) to see this western vagrant flycatching and perching on low vegetation. This, of course, adds a new species to the refuge list.

How many Say’s Phoebes have ventured to the northeast in 2020? There are two winter records from Vermont, of all places. An April 12 record from an airfield near Cleveland, Ohio, and two records from earlier in April near the west shore of Lake Michigan round out the other listings. Today’s Great Swamp record is it for the region as of today. Here is a Say’s Phoebe map for 2020 generated from eBird data today. The blue markers represent beyond thirty days from today and the red markers within thirty days. 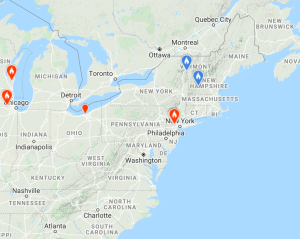 Below is the typical range of this species courtesy of Cornel Laboratory of Ornithology’s Birds of the World.

Lists and Annual Reports Scroll down for annual reports from 1992-2019.

List of Accepted Records of Rare Birds in New Jersey

A poor photo below, but a look at the underside of the Say’s Phoebe as it lifted off of a perch. Apparently, it was not seen after approximately 12:30-1:00 PM.