A Ruddy Duck was on Mt. Hope Lake in Rockaway Twp. this morning. This is the first August record of this species for either Morris or Somerset counties in the eBird database. In fact, outside of many Meadowlands and Kearny Marsh records from Bergen and Hudson Counties, it is one of a small handful of North Jersey August reports – period. Of course, someone may have records buried in a drawer or on a personal computer somewhere, in which case, we will ever know.

Also at Mt. Hope was a juvenile Bald Eagle roosting near the nest site. No obvious raising of young at the nest was witnessed this year, then again, the nest is difficult to view once leaf-out occurs. Mute Swan numbers are down to 26 (185 was the peak count on June 8, 2013). The Trumpeter Swan of very dubious origin continues as it has throughout the summer. This is probably one of the Bernardsville captive Trumpeter Swans’ offspring.

2 Pectoral Sandpipers, a Killdeer and 2 Least Sandpipers were seen this morning at the Lincoln Park Gravel Pits despite flooded habitat (Jamie Glydon). This may be it in the Pits for a while considering the rain that is forecast for this weekend. Even a small amount of rain seems to submerge any fringe shorebird habitat in the Pits. It may be that when the Pits flood, shorebirds journey to nearby Walker Avenue Wetlands in Passaic County, which is literally across the Pompton River from the southern end of the Pits.

The Yellow-rumped Warbler found on Wednesday continues. A Northern Harrier was also seen.

Below is an American Kestrel photographed yesterday, Aug. 30, 2013 by Chuck Hantis in the Great Swamp NWR 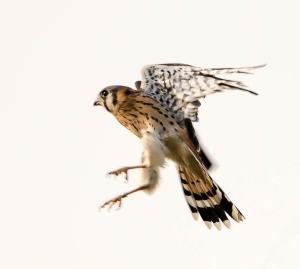