Posted on September 21, 2013 by Jonathan Klizas

September 2012 saw 7 reports of Red-headed Woodpeckers in New Jersey north of Cape May according to the eBird database. That is how scarce they were for most of the year.

September 2013 sees a different story developing. Hardly a day goes by without a report of a new or existing location for Red-headed Woodpecker in North Jersey from Long Hill Township to Glenhurst Meadows to Bergen County to Walkill NWR to Middlesex County to Sandy Hook.

Today, add Troy Meadows to that list. 2 Red-headed Woodpeckers were near the old trap shooting range at the end of Troy Meadows Road (Jamie Glydon).  Troy Meadows is a magnet for this species when they are increasing their appearances in the mocosocoBirds area. A Merlin was in a nearby snag. 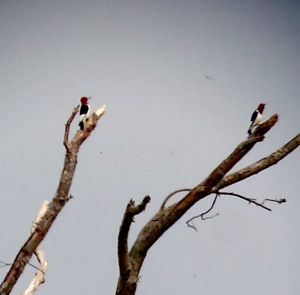 2 Red-headed Woodpeckers, Spotted and Solitary Sandpipers were among the birds eBirded from Glenhurst Meadows by Jim Schlick.