3 Sandhill Cranes were seen at the Great Swamp NWR today from the overlook on Pleasant Plains Road – and they have apparently been there since yesterday, Mar. 15 when they were photographed. Randy Little saw them today between 1:30-2:00 pm. Here is his account: “Three Sandhill Cranes were circling high over the lookout on Pleasant Plains Road. Eventually they began a descent toward what appeared to be an intended landing in the distant north side of the visible marsh, but they began flapping their wings again as their altitude dropped to about 30 feet, whereupon they flew southeastward at about 50 feet altitude until I could no longer see them due to intervening trees. A gentleman who was seated at the overlook told me that 3 cranes had been there yesterday.”

Simon Lane saw the Sandhill Cranes a short time afterward (2:10), along with the aforementioned gentlemen who saw them yesterday, when a Bald Eagle roused up the waterfowl and the Sandhill Cranes. They flew, briefly shifting their position.

Jason Denesevich photographed them in flight at 4:50 p.m. (see the above photo). They could still be in the area. This is the sixth known record of Sandhill Crane in Morris County. The link for the List of the Birds of Morris County is here and lists all of the known records in the county of rare species. It seems as though Sandhill Cranes come in threes this year in northern New Jersey. Three were seen flying over Round Valley Reservoir a few days ago and 3-6 have frequented Franklin Township throughout the winter.

4 Tundra Swans were present at Clyde Potts Reservoir this morning. The swans were resting on the ice when this observer arrived at 8 a.m. as if they had spent the night. At 8:45 they became restless, floated on the water and took off. It is interesting that 4 Tundra Swans were in Branchburg yesterday, which is south of Mendham, and then left sometime in the afternoon. The Red-necked Grebe is present for the 23rd day at Clyde Potts. Below is a photograph of the Tundra Swans lifting off at 8:45 a.m. 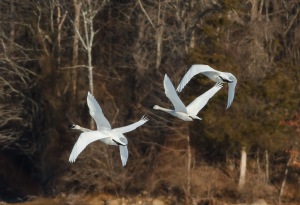 A late light-morph Rough-legged Hawk was at the fields near the north gate of Duke Farms today. 2 Blue-winged Teal were in a wooded pond on Opie Road this morning (Frank Sencher, Jr.).

A Blue-winged Teal was at the Friends Blind in the Great Swamp NWR this morning (Simon Lane).

From Bobby Skrabal:
There were 4 Rusty Blackbirds in a mixed flock of Red-winged Blackbirds and Common Grackles at Duke Island Park this afternoon.

From Dave Hall, Saturday, Mar. 15:
I diverted my scheduled NJAS trip yesterday (Saturday) morning to the Edwards Rd.
access point to Troy Meadows, and found a hotspot for Rusty Blackbirds. Some of the highlights are below:
Rusty Blackbird – 35 – Several small flocks feeding on the ground at the edge of the frozen marsh; this is a conservative count as some Rusty Blackbirds were sometimes mixed with a huge flock of Grackles and Red-winged Blackbirds. The counted birds were seen at close range in small separate groups, perched or feeding away from the other blackbirds.
Fox Sparrows – 7
Also interesting to note that some Great Blue Herons are already coming back into the rookery.

Tony Masso found and photographed a Greater White-fronted Goose at Duke Island Park , yesterday, March 15. The photo is below.

From Jennifer Books:
The male Redhead duck continues this morning at Osborn Pond along with almost 30 Common Mergansers (both male and female), 20 Hooded Mergansers, and about 30 Ring-neck Ducks. While observing these birds I also saw my first muskrat of the year grooming him or herself on the edge of the remaining ice.

Chuck Hantis reports that the Melanie Lane Wetlands is thawed and had Northern Pintail there today. Chuck photographed the following Peregrine Falcon 1/4 mile away.