6 Tundra Swans are at Lake Hopatcong. Most of the lake remains icebound, but there are small, thawed areas where waterfowl are congregating. The Tundra Swans, along with Mute Swans, Wood Ducks, Ring-necked Ducks and Canada Geese were in the open water at the south end of Liffy Island in the northernmost part of Lake Hopatcong. 135 Ring-necked Ducks, 27 Bufflehead, 22 Hooded and 25 Common Mergansers are scattered wherever the ice is thawed. Two of the resident Bald Eagles were evident.

Mt. Hope Lake is mostly thawed but waterfowl have not found out for the most part. 8 Mute Swans, 2 Wood Ducks, 4 Mallard, 9 Ring-necked Ducks, 2 Lesser Scaup, 15 Bufflehead, 6 Hooded and 40 Common Mergansers were the only waterfowl at the lake this morning. 2 Sub-adult Bald Eagles were in the area with an immature eagle at the nest, but where are the adults?

Below is a photo of Jonathan’s Woods in Denville and Rockaway Townships. This is a Morris County park whose “Cathedral Pines” were annihilated by Sandy, the superstorm, in 2012. A post with photos of the woods from November 2012 is here. As seen in the photo below, the hundreds of fallen tree trunks are cut and ground. The area is undergoing a restoration. Traditionally, this is a reliable location for nesting Pine Warbler, Eastern Bluebird, Red-shouldered Hawk, Great Horned Owl and a wintering site for Red-breasted Nuthatch, Pine Siskin, Fox Sparrows, etc. It will be interesting to see how this project affects the avian, and other, wildlife.

From Roger Johnson at Troy Meadows:
I was in Troy Meadows this morning for about 3 hours. The rivers were too high to get back to count Red-headed Woodpeckers, but I had a fun morning.
2 Eastern Towhees
6 Fox Sparrows
50+ Wood Ducks – they are everywhere
12 Hooded Mergansers
22 Green-winged Teal
2 Blue-winged Teal
2 Northern Pintail
no Red-headed Woodpeckers
Rusty Blackbirds – maybe 20, I could note see them because they were on the other side of the high water.

From Jennifer Books:
The Tundra Swan at the Headquarters pond in the Great Swamp was still there early this morning between 9 and 10AM I spotted it in the same location as reported yesterday. Some of the other birds noted included 1 Northern Harrier, 2 Hooded Mergansers, 1 Wood Duck, 6 Ring-necked Ducks, and a flock of 14 Crows. I will also add that my sister tried to re-locate the swan around mid-morning and was unable to find it. Wondering if anyone else saw it later today? 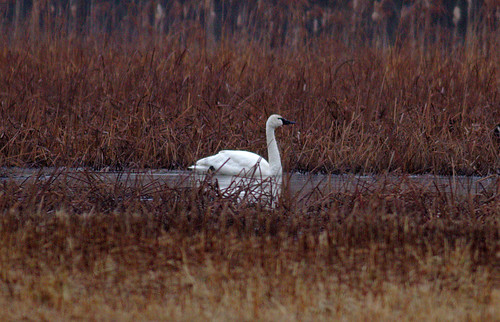