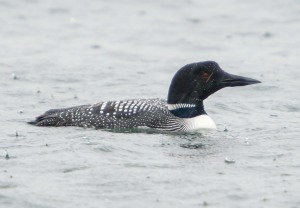 A male White-winged Scoter was found on Boonton Reservoir’s north end this morning (Simon Lane, J. Klizas). Double-crested Cormorants are growing in numbers with 125 near the island. 100 Tree Swallows were flying over the water. The reservoir hosted 3 Common Loons and a diminishing number of Common Mergansers. An immature Bald Eagle continues to spend its day at the reservoir.

From Chuck Smith at the Lincoln Park Gravel Pits:
I spent about an hour this morning on the dike that separates the Community lake from Pia Costa lake in Lincoln Park. On the raptor front: 3 Ospreys, Merlin, Coopers Hawk. Ducks were scattered with most on the big lake. 70 + Common Mergansers, 20 + Ringed-necked ducks, a pair of Wood Ducks, 4 Hooded Mergansers.

Ducks and Gulls in Somerset County

With no reports since last Sunday at Duke Farms, the drake Eurasian Wigeon resurfaced again today at a flooded Finderne Wetlands (Jeff Ellerbusch). As is typical with this individual, it was in the company of a single American Wigeon drake. Also present were 8 American Wigeon, 10 Northern Pintail, 26 Green-winged teal and the typical species of this location.

2 Iceland Gulls and at least 5 Lesser Black-backed Gulls were reliably reported from the Norz Farm area of River Road in Hillsborough Twp. and Opie Road in Branchburg Twp. Recently, this area has seen large congregations of Ring-billed Gulls in the farm fields near the South Branch of the Raritan River, just south of South Branch Road.

An interesting duck was found on Opie Road by Frank Sencher, Jr. and photographed by Jeff Ellerbusch. It looks like a Ring-necked Duck and Lesser Scaup, or Scaup spp., hybrid. It was with 2 drake and 1 hen Ring-necked Ducks.

Here are Jeff’s field notes: “Back (lower mantle and scapulars) vermiculated and much lighter than on RNDU, with obviously contrast to darker tertials and rump (all dark back on RNDU). Flanks/sides lightish gray, much lighter than RNDU, and appeared slightly vermiculated. Like RNDU, sides were lightest where they bordered the chest, though with far less contrast to the rest of the side compared to RNDU, this due to overall lightness – also lacking the drastic upswing “spur”.

Head profile similar to RNDU though slightly more gentle, less drastic of a peak. Head-on view showed far less of a pinch above the jowl area compared to RNDU. Head showed a distinct green sheen in direct comparison (lighting and angle) to the 2 drake RNDU, which showed purple.

Bill structure similar to RNDU, though maybe slightly deeper in direct comparison. Width seemed about the same. Overall bill color was slightly, but noticeably lighter compared to RNDU, and while it did have the white patch before the tip/nail area, it lacked the white base and outline to the bill.

Click on one of the photos below to display a slide show of the images of the hybrid. Once in the slide show, click on the x in the upper left corner of the slide show window to exit. All photos are by Jeff Ellerbusch, taken at Opie Road, Branchburg, NJ on March 30, 2014.

5 Sandhill Cranes on Randolph Road were reported today on JerseyBirds. This is the first report in quite some time for the Franklin Township cranes.

The Red-necked Grebe of Clyde Potts Reservoir in Mendham Township is history. First found on February 22, it was last seen on March 27, a string of 34 days.

Correction: yesterday’s email post (Mar. 30) incorrectly labeled the photo of the plant matter as Water Chestnut. Instead, it is the rhizomes of either water lily or spadderdock. Thanks to Thom Almendinger and Mike Ostrow for the correction.