The Hunterdon County reservoirs had reports of numerous Horned Grebes earlier today. The western lakes of Morris also had a taste of the influx. Alan Boyd found the following Horned Grebes:

Interestingly, Boonton Reservoir and Lake Parsippany had no Horned Grebes. Boonton Reservoir has 9 Common Loons, a female White-winged Scoter, Green-winged Teal, a drake Northern Shoveler, Bufflehead, Ruddy Ducks and Common Mergansers. The island is bursting with activity with approximately 26 Great Blue Herons and 100 Double-crested Cormorants vying for nest sites. Can they co-exist? They seemed to last year although the number of Cormorants overwhelmed the Great Blue Herons (J. Klizas).

Lake Parsippany has a diminishing number of Common Mergansers, 130, and a Red-breasted Merganser. Also at the lake: 3 Pied-billed Grebes, 3 American Coot, Ring-necked Ducks and, as every lake in Morris County seems to have right now, a Common Loon.

A Black-crowned Night-Heron spent the day at Green Brook Park on the North Plainfield side and was joined for a while by a Great Egret (Walter Blenderman).

The 2 Black-crowned Night-Herons of Jefferson Road Pond, Parsippany were viewed today on the east side of the pond (Tom Gorman, Chris Thomas).

Karen English eBirded a Blue-winged Teal at the Great Swamp NWR and also the first Palm Warbler of 2014 in either Morris or Somerset County. Thank you, Karen.

Jeff Ellerbusch had a “Look up in the sky. It’s a bird, it’s a duck, it’s a…a…a flock of Canvasbacks!” moment at Glenhurst Meadows this afternoon. Jeff also had the presence of mind to get a photo of these 13 going-away Aythya ducks (the heavily cropped photo is below). The photo confirmed what Jeff thought when he viewed them: Canvasbacks. This is an excellent record for Glenhurst and Somerset County. 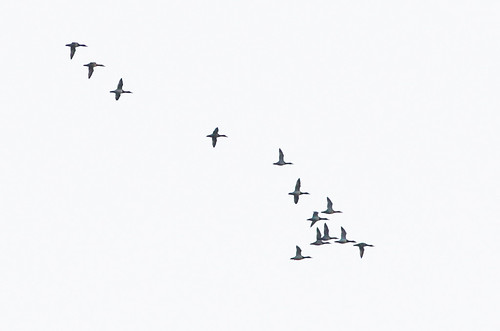 From Leslie Webster:
News from Loantaka Brook Reservation: two small groups of Eastern Phoebes were passing through in the tree tops, calling to each other this morning, as they travelled in a generally northerly direction. An additional Phoebe was singing near the brook in the woods, presumably setting up its usual territory. The Wood Ducks are in the woods, in pairs, and Belted Kingfishers are also patrolling the brook in the woods (setting up territories?), as well as at the pond. At Kitchell Pond, at least 10 Tree Swallows were feeding. There were no waterfowl to speak of and the Red-winged Blackbirds seem to have land distribution well in hand.