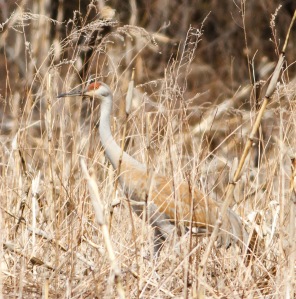 A family from Hillsborough Township found an unusual visitor on Wednesday in the cornfield adjacent to their yard. Not sure what it was or what it was doing there, the family accurately determined it was a Sandhill Crane. The crane was still in the field this morning and the family was concerned that the bird was injured since they had not observed it fly. A call made to Scherman Hoffman Sanctuary in Bernardsville made its way to this writer, who happened to be in Hillsborough. An afternoon visit to the location ensued to determine if, in fact, the Crane was infirm or not. The bird was easily found in the cornfield. An attempt was made to slowly creep up on the bird to see how it would react. It reacted as it should and in a moment took off in flight in apparent good health. Is this one of the Franklin Township Sandhill Cranes who spent their seventh winter in the area recently?

From Alan Boyd:
Purple Martins have returned to one of the houses on the Port Morris side of Lake Musconetcong. The Red-throated Loon continues on the lake along with 2 Bonaparte’s Gulls, 3 Horned Grebes and a few scattered Buffleheads.

Budd Lake had a group of 7 Red-breasted Mergansers along with a few Common Mergansers and 6 Horned Grebes.

Three Black-crowned Night-Herons were seen at Jefferson Road Pond this afternoon with a growing amount of whitewash on the rocks of the island (Chris Thomas).

From Walter Blenderman:
Two Black-crowned Night-Herons at the West End Pond of Green Brook Park, North Plainfield; one up at the front, one way in the back, both in the water, playing easy to see today.

Boonton Reservoir had 6 Common Loons, 1 Horned Grebe, 2 Buffleheads and 6 Common Mergansers. The island and surrounding waters held at least 192 Double-crested Cormorants (do you think one could be a Neotropic? Too far to tell). 27 Great Blue Herons and, interestingly, 2 Great Egrets were also on on the island.

News from Loantaka Brook Reservation: warmer air has brought Palm Warblers, Ruby-crowned Kinglets, Brown-headed Cowbirds, and Hermit Thrushes into the reservations. These species were observed in the woods and at Kitchell Pond. Every Spring, at least one Osprey pays a brief visit to the pond. Today an Osprey was tearing apart a fish in the tall dead tree to the west of the ponds. A fellow birder pointed out a pair of Blue-winged Teal in the back pond, a rather uncommon species here. In the woods, a male and female Pileated Woodpecker were finding goodies in a fallen, decaying log.