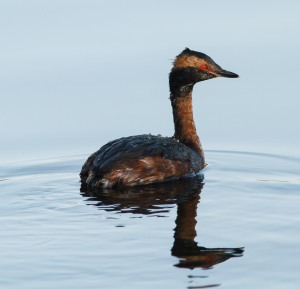 A Laughing Gull (LAGU) was at the Norz farm area of River Road this morning with 40 Ring-billed Gulls (Jeff Ellerbusch). LAGU is a rare species in the mocosocoBirds area, more so in Morris than Somerset.

The area’s first American Bittern for 2014 was at the near blind at the Wildlife Observation center of the Great Swamp NWR as eBirded by Tom Smith.

4 Bonaparte’s Gulls were at Van Every Cove at Lake Hopatcong this morning. The speed boats are motoring up and fishermen are numerous at this boat-happy body of water. Nevertheless, there are still water birds to find. 134 Bufflehead are scattered about New Jersey’s largest lake, the most located at one place in 2014 in Morris and Somerset counties – also, 2 Lesser Scaup, 9 Common and 2 Red-breasted Mergansers, 6 Common Loons, 1 Pied-billed Grebe and 8 Horned Grebes, most in nearly complete alternate plumage.