After experiencing the seemingly never-ending winter that recently passed, today reaffirmed how great nature can be and how lucky we are who study, appreciate and revere it. The editor apologizes for not listing more but it is the month of May with bushels of bird reports and the hour is late. 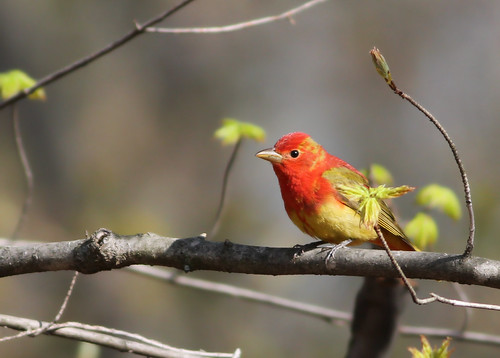 Summer Tanager is a rare visitor indeed to Somerset, Morris and most counties in New Jersey. This immature male was observed by Jeff Ellerbusch, Grant Price and Bob Roland in the Chimney Rock parking lot. 8 species of warblers were also in attendance as May starts to heat up. 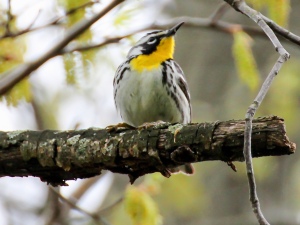 What has become an unprecedented spring for Yellow-throated Warblers in the mocosocoBirds region adds another record today. Jim Mulvey found and photographed a Yellow-throated Warbler (Setophaga dominca albilora) by the Kitchell Pond bridge on the main path at Loantaka Brook Reservation. The warbler was still present at the same location at 5 p.m.

Numerous other warblers and vireos were reported by many observers today from Loantaka.

Vesper Sparrow and Shorebirds in the Great Swamp NWR 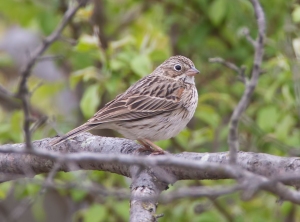 Jim Gilbert found the Vesper Sparrow pictured above along the drive leading from Lees Hill Road to the Fenske Vistor Center. It was still there at 6:00 p.m.

Pleasant Plains Road is flooded and impassable beyond the Fenske Center but the water has also created favorable shorebird habitat. The following shorebirds were seen near the water’s edge: 1 Spotted and 2 Solitary Sandpipers, 2 Greater Yellowlegs and 2 Least Sandpipers (J. Klizas, Simon Lane, Joe Pescatore). Modest, of course, but this is Morris County where every shorebird is savored; one cannot be sure when one will be seen again.

Jonathan’s Woods is more than the late Cathedral Pines, mostly destroyed by superstorm Sandy in 2012. There is an extensive wetlands system, deciduous woodland and mixed habitat which is a magnet for migrant songbirds in spring.

Various stops in this excellent birding area, with Green Pond Road as its main artery, produced the following:

A Common Raven harrased a Red-tailed Hawk over Green Pond Road at Craigmeur.

The Common Terns of yesterday are gone but 4 basic plumaged Bonaparte’s Gulls remain along with hundreds of swallows and 2 Common Loons at Budd Lake.

From Bobby Skrabal, Hillsborough Twp.:
During the past two days we’ve had a number of visitors to our yard. The annual Rose-breasted Grosbeak pair and a Ruby-throated hummingbird showed up yesterday at the feeders. We also had a Veery foraging in the woods yesterday, and today the Wood Thrush was singing bright and early. The list of warblers over the past two days: Yellow-rumped, American Redstart, Northern Parula, Black-throated Green, Black-throated Blue, Blackburnian, Black-and-white, and an Ovenbird. Other notable birds included an Eastern Kingbird and two Indigo Bunting today, as well as a Yellow-throated Vireo, which was singing from the top of the trees, yesterday. Still waiting for the Baltimore Orioles to arrive…

From Walter Blenderman:
1 Black-crowned Night-Heron on the Somerset side of the Green Brook Park opposite the Horse Shoe Pond – first time I’ve seen one there. It was kind of dirty looking on the belly area; mud, I guess. There was also 1 Green Heron in a tree by the same pond (Union side).

2 Black-crowned Night-Herons at West End Pond, on tree limbs in the back.